Conditions Applied Acoustics Systems Lounge Lizard EP-4 is an electric piano plug-in delivering authentic Rhodes and Wurlitzer sounds in an everything-you-need package. NEW Library The completely renewed factory library features the classic Rhodes and Wurlitzer sounds as well as over gig- and mix-ready custom electric pianos making good use of the compressor, equalizer, and multi-effect processor. NEW Compressor and equalizer These new additions are perfect to add punch and definition to your sound, letting you cut through any dense mix or stage. 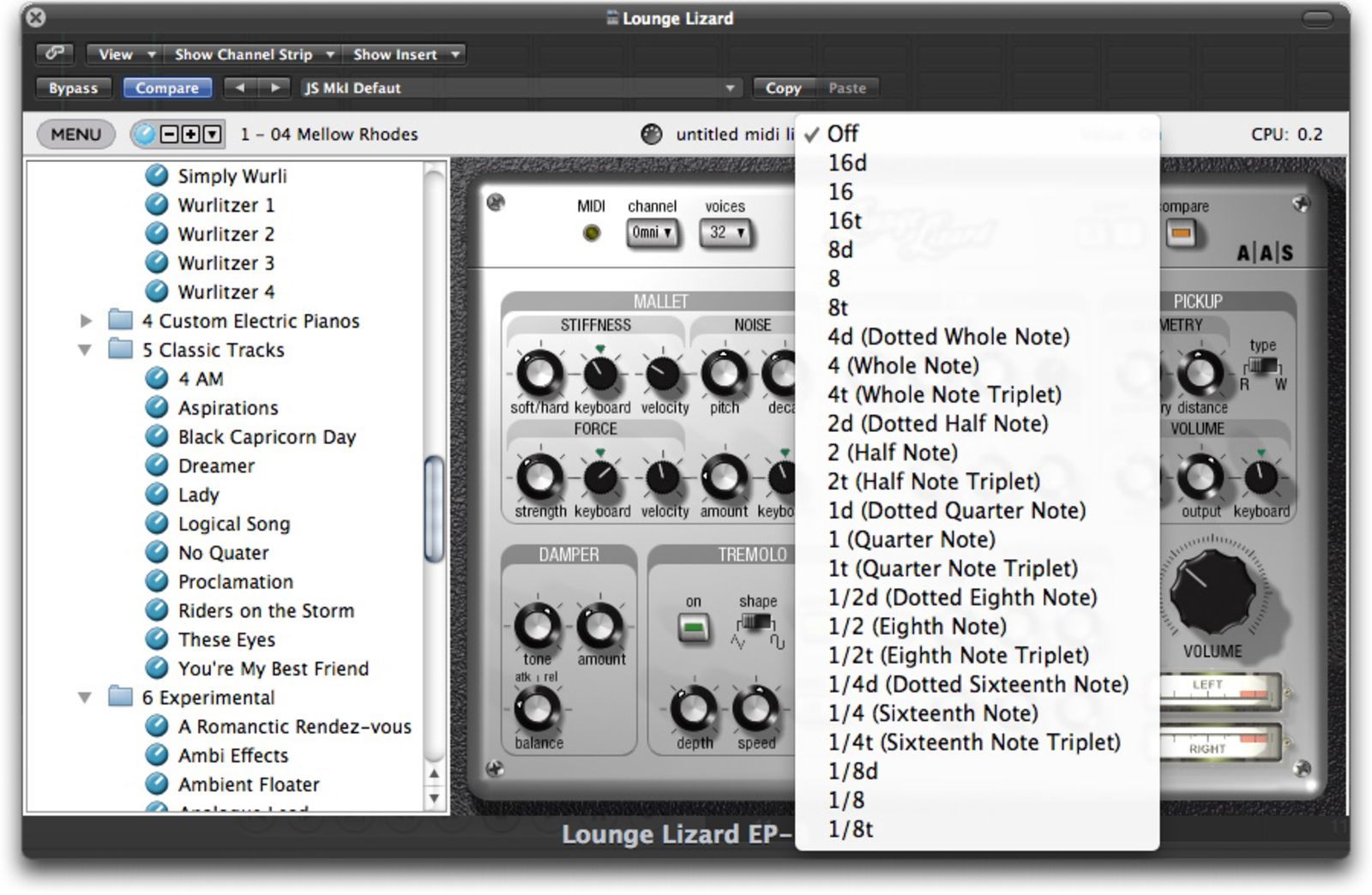 Electric Piano The electric piano: The first instruments he built were made of aircraft pieces and were intended to entertain army servicemen. The electric piano as we know it today grew out of a partnership between Harold Rhodes and Leo Fender who released a note version of the instrument.

But it is not until , after the takeover of Fender by CBS, that the instrument really came to life when a note model was released.

From then different models were introduced including the Mark series as well as the two note Suitcase and Stage models until when production ceased. Harold Rhodes was not the only one to work on the electric piano. In the thirties, the inventor Ben Meissner had developed an electrostatic pickup design he used to amplify a conventional upright piano. The Wurlitzer company became interested in this idea but replaced the piano strings by metal reeds.

In , the EP piano was released and followed by many other models until The electric piano, with its distinctive sound, has marked the history or rock and jazz in the sixties and seventies.

Modeling an electric piano Let’s see how it works Tine-based The mechanism of an electric piano is relatively simple. A note played on the keyboard releases a damper and activates a felt-tipped hammer which hits a metal bar having the shape of a tuning fork.

It acts as a resonator adding sustain to the sound. The vibrations of the tine bar are picked up by an electromagnetic pickup and sent to an amplifier, very much like in an electric guitar. The result is a very expressive instrument with a characteristic smooth tone which can also be made to growl or bark when played harder and the pickups introduce nonlinear distortion.

Reed-based The functionning of a reed-based piano is very similar except that instead of a fork, the hammer hits a metal reed. The reeds are placed near metal plates which together with the metal reeds form an electrostatic or capacitive pickup system. Compared to tine-based pianos, reed-based pianos are known to have a brighter and more hollow sound.

All these elements have been carefully modelled in order to allow for a very accurate reproduction of the tone and dynamics of electric pianos resulting in an authentic recreation of their action and feel. The engine also includes an EQ to shape the tone and an adjustable stereo tremolo, effects that were built-in with specific piano models. Tuning an electric piano The heart of the electric piano’s character Electric pianos provided adjustment for pitch, timbre, and volume.

On the original instruments, the tine is fitted with a spring which can be moved along its length for fine-tuning. The tone and volume can also be adjusted by changing the position of the tine in relation to the pickups.

Tuning a reed-based piano is even more delicate. On the tip of each reed is a lump of solder whose size and shape alter both the pitch and the tone of the note.

These adjustments were at the heart of the electric piano’s character as they control the harmonic content, attack, and decay of the sound—offering unique tone to each player.

But there was a price for this flexibility, several painstaking hours with a screwdriver or soldering iron and incredible patience was needed to change the sound of an electric piano. Suffer no more—with Lounge Lizard, the preset library provides a selection of thoroughly chosen configurations reproducing popular models so that you do not have to touch one knob before starting to play. The flexibility of the engine gives you access to all the physical parameters of the instrument allowing you to fine-tune every preset to your playing style.

For example, adjust the position of the pickups using two simple controls: Distance and Symmetry. Or increase the stiffness of the mallet as you play, change the decay of the tone bar in real time, the choice is yours.

Electric Piano The electric piano: The first instruments he built were made of aircraft pieces and were intended to entertain army servicemen. The electric piano as we know it today grew out of a partnership between Harold Rhodes and Leo Fender who released a note version of the instrument.

Each component of these instruments has been modeled with AAS cutting edge physical modeling technology to provide realistic and lively sounds. Physical modeling uses the laws of physics to reproduce the behavior of an object.